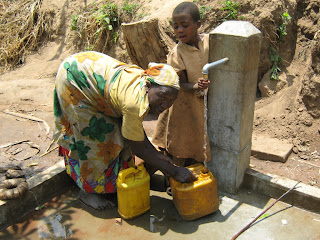 Ambassadors for the Poor in Aberdeenshire have recently raised £15000 for a water project in Burundi, Africa.   The Nyembuye clinic is in a remote village in the Matana province about 20km from the town of Rutana.   The clinic serves a refugee returnee community, but until recently had no water supply.   Water was collected in jerry cans some 1.5.km from the clinic and carried down the mountainside from a spring.   Christian Water Engineers  surveyed the site and confirmed that it was possible to pipe water from the spring but that the cost would be in the region of £15000.   The Aberdeenshire group, some of whom had visited Nyembuye, took it upon themselves to raise the funds, and within a year had the necessary £15000.   Now Nyembuye clinic has its own water supply, however a number of other spin off water supply taps have been situated near other community hot spots and dwellings making it an all round success for everyone.   Now the water project has its own committee who supervise its use and keep it in good order.
Posted by McGrew at 09:20

The purpose of this blog:

The purpose of this blog is to keep you informed about the work and fundraising activities of Mission International's teams of Ambassadors for the poor.

Blogs are designed to show the latest post first and so to find out what went on before you need to scroll down or click on your preferred item on the blog archive below.
It's true that "we can't help everybody everywhere, but we can help somebody somewhere", and with your help we can get crucial support to those who need it most.
We would love to hear from you and to enlist your help in raising crucial support for the poor. email us on
mail@mission-international.org
if you have any comments or questions.

Mission International is a charity registered in Scotland - Number SC038645

Get someone somewhere out of a Fix, support Fix-a-Fix.

Purpose: The Fix-a-Fix fund has been set up to help Mission International channel resources to situations where non-ring-fenced funds are required. Mission International projects are supported by very generous donors whose funds are 'ring-fenced' i.e. they must be used for the purpose for which they are given. However there are times when small units of funding are required outside of the regular funding streams, Fix-a-Fix is set up for this reason. Now when an individual, a family or a community group requires a grant of up to £1000 for a small one-off project, then funds can be made available to them.

Support Fix-a-Fix: If you can support this venture providing a small capital grant in a needy area then please either use the giving links at the top right of this page or click on the Fix-a-Fix logo below.

Contact: If you would like to discuss Fix-a-Fix with Mission International please get in touch via the following email address mail@mission-international.org